How Exactly Do They Work 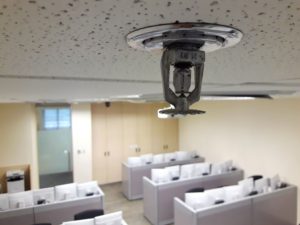 For this week’s blog post we will be focusing on Pre-Action Fire Sprinkler Systems. Pre-Action Systems are very specialized. They are used in locations where accidental activation would be detrimental. These systems are good in data centers and museums.

How Do They Work

A single interlock system is very similar to a dry system. The operation of this system requires a fire detection event to take place before water enters the system. Usually a heat or smoke detector are one of the devices that activate the system. Once the system activates a mechanically latched valve is opens to allow water to flow through the system and out of the fire sprinkler heads. The goal of the Pre-Action Fire Sprinkler System is to reduce the time delay of the water being delivered to the fire sprinkler system.

A double interlock system is similar to a deluge system.  The main difference is that automatic fire sprinklers are used. The operation of this system requires two fire detection events to take place before water flows through the system. This means that both a heat or smoke detector and at least one fire sprinkler needs to be activated before water will flow. If only one of the fire detection events occur then water will not flow into the system.

The biggest advantage to single and double interlock systems is that water will not flow if a sprinkler opens, the piping system develops an air leak, or there is a loss of air pressure in the piping. Instead, there will be a trouble alarm. This alarm will allow the building to be notified that their system needs to be fixed. This allows for the system to be operational when it is needed. Another advantage to single and double interlock Pre-Action Fire Sprinkler Systems is that they will only flow water in the event of activation of devices. This protects valuable material from accidental discharges.

If you still need a Pre-Action Fire Sprinkler System, but want the activation of fire sprinklers to be a trigger for the system then non-interlock systems are for you. They still have the protection of a mechanical valve, but they require less detection devices to operate them.

A disadvantage to all of these systems is that they are complex which leads to high installation and material costs. Although, those high costs are worth it in buildings that need these systems. Another disadvantage is that there are many working parts involved in these systems. This means that regular maintenance is vital to ensure that your system is always in working condition.