How Common Are Fires Started By Lightning Strikes? 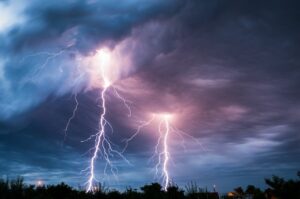 Warm summer rain turns into thunder and lightning storms. These storms can be beautiful and exhilarating to watch, but when lightning strikes it can  be harm people and the land that gets stuck in the storm.

It was reported by NFPA that lightning caused an estimated annual average of the following between 2004-2008:

House fires that are caused by lightning strikes are only 18% of all reported lightning fires. But, this small percentage of fires accounted for:

Lightning does not have to start a fire to cause fatalities. On average lightning causes 238 injuries per year and 38 deaths. NFPA reports that the most common places for lightning fatalities are:

Lighting can strike at any time, but it is most dangerous when it strikes in the summer months. This is because this is when grass, brush, and trees dry out for the summer. Living in California we are always on alert for wildfires during these summer months. When summer storms hit, we all hope that a wildfire does not break out from a lightning strike.

One of the most frightening things about lightning is that we cannot control where it strikes, or the damage that it does to our earth. But, we can be educated with safety tips to try and protect ourselves as much as possible.

If someone is struck by lightning call 9-1-1 immediately.